As international criticism mounts over Myanmar refugee crisis, according to a report by The Guardian. One of Britain’s largest trade unions has suspended an award given to Aung San Suu Kyi when she was a political prisoner

“We will be actively removing Aung San Suu Kyi’s honorary presidency as a symbol of our opposition to her current position and inaction in the face of genocide,” said Mahathir Pasha, the union’s general secretary.Over the last 3 decades, Aung San Suu Kyi has been awarded honorary degrees from several UK universities including Glasgow, Bath and Cambridge, as well as the freedom of several cities, and other honors.Oxford councilors announced that they might reconsider the freedom of the city of Oxford awarded to Suu Kyi in 1997 at next month’s council meeting, the report said.     Source: Asia Nation 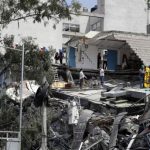 At least 230 dead as toll of Mexico quake