Home » At least 230 dead as toll of Mexico quake 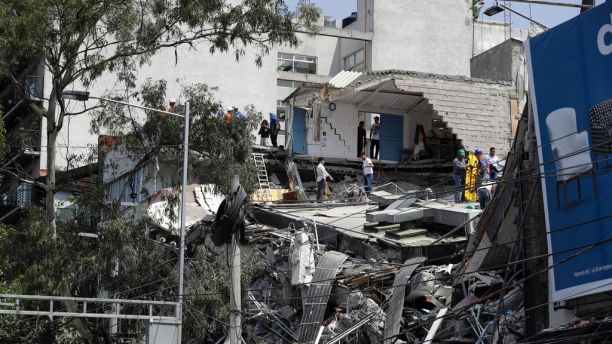 At least 230 dead as toll of Mexico quake

After the 7.1 tremor struck Mexico City, Thousands are thought to have been left homeless reducing entire buildings to rubble.

Rescue teams in Mexico are working round the clock to search for survivors of a devastating earthquake, with the number killed expected to top 230. Authorities fear that the death toll from the 7.1 scale quake may yet rise as volunteers and professional teams comb through the rubble.

At least 21 children are among the dead, and 30 remain missing from the now-devastated elementary school they attended. The quake flattened at least 40 buildings in Mexico City, and the focus in the coming hours will shift towards those unable to return to their damaged homes, the executive director of Oxfam in Mexico told Sky News.

“And that is the next step of the humanitarian crisis. So the focus right now is looking for survivors under the rubble, but as days go by, many people will need appropriate shelter. “That (will be) the second part of the response – last night there were two million people in Mexico City without electricity.”

Thousands of volunteers and emergency personnel have spent the night scrabbling through the debris in a frantic search for survivors. Rescuers were alerted to survivors at one collapsed building by using a mop to make a noise and also a fiber optic cable.

A team member said: “We have detected five people. A fiber-optic has been used and based on the temperature, it tells us where they are now. “We cannot permit that any type of heavy machinery is used to demolish (the damaged building) because what they’re going to do is kill them. At the collapsed Enrique Rebsamen school in Mexico City, 24 bodies – all but two of them children – have been recovered.

Thirty children and 12 adults are still missing and there have been reports that trapped children have sent WhatsApp messages from underneath the rubble. Ruptured gas mains sparked fires in the city and in other towns in central Mexico, prompting authorities to tell people not to smoke.

The quake was centered near Raboso in Puebla state, 76 miles (123km) southeast of Mexico City, but the shaking in the capital was almost as intense. The earthquake came less than two weeks after an 8.1 magnitude tremor in southern Mexico killed at least 98 people. Amid the latest quake, the Popocatepetl volcano near the capital had a small eruption, flattening a church on its southern slopes and killing 15 people attending a mass. Source: Sky News