The chief of Pattaya police has got a lot on his human trafficking plate – including a contingent of Ugandans luring their fellow countrywomen into the sex trade.

Yesterday two Ugandans were arrested for tricking two other women from the same country into selling themselves on Beach Road in Pattaya.

Marie Nagawa, 29 and Rosemary Nebwiri, 31 were hauled in Friday on warrants to face the chief of police Apichai Kroppetch.

They were charged with luring people into the sex trade.

Marie had paid for the airfares from their home country of two women who later went to make a complaint to tourist police in Chonburi.

The tourist police had then taken Miss Forsia and Miss Dollar, the victims, to Pattaya police to register a formal complaint.

The two women claimed they had no idea they were going to have to sell themselves when they came to Thailand.

Apichai explained: “The two victims arrived at Suvarnabhumi airport and were then brought to Pattaya where they met Rosemary. She took them to stay at Chichi House in Pattaya Sai 2., Soi 17.

“In the room there they met Marie who immediately told them to take a shower and said they would then be going out to work.

Forsia said “no way” and was allowed to go back to the room but Marie said that her friend had to stay with her to start paying off the debt that they both owed to her.

Apichai continued: “Next day both victims escaped and fled back to Suvarnabhumi with the intention of going straight back to Uganda. But when they got to the airport their flight tickets had already been cancelled so they went back to Pattaya again”.

Then on Wednesday of this week the victims managed to escape again and went to the airport once more.

“This time,” Apichai continued, “both Rosemary and Marie followed them there then, before the victims could leave, they reported to airport police a bogus claim that they were the victims of theft”.

Forsia and Dollar were searched but no evidence was found and all four were taken back to Pattaya.

This ultimately led to the issuing of warrants and the arrest of the two Ugandans who denied all charges. 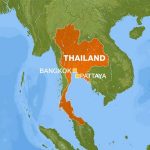 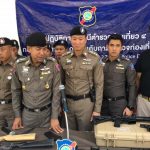 Take a look at what the cops found in Pattaya yesterday