Livestock development officials raided a house in Ubon Ratchathani’s Muang district early on Tuesday and arrested the owner for allegedly operating a slaughterhouse without a licence.

The house owner, Somjit Muenthao, was arrested and charged with operating a slaughterhouse without a licence and slaughtering animals without first informing the authorities of their number and source. 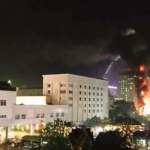