Home » Timing of team’s discovery in cave was matter of luck: NYT

The British diver found the 12 missing boys and their assistant coach trapped inside Tham Luang cave because he ran out of a guiding rope, forcing him to the water’s surface, according to The New York Times.

John Volanthen was placing guidelines in an attempt to get closer to the missing team in the flooded cave network when he found the boys.

As he came to the water’s surface, “there they were, all 13, staring at him through the light of his headlamp,” according to the Times.

If his line had been even 15 feet shorter, he would have turned back and not reached them on that Monday night dive. The group would have spent at least another night on its own in the pitch black, not knowing if a rescue would ever come.

“Literally, he finished his line, stuck the line reel in the mud, and they were looking down,” Vernon Unsworth, his friend and fellow cave explorer, said on Tuesday.

With the search officially turning to a rescue operation on Tuesday, the main questions now have been the best way, and the best time, to get the boys and their coach out of the cave.

The three British cave diving experts have been praised across Thailand and the world for using their expertise to aid in the discovery of the missing team trapped in one of the longest caves in Thailand after a flash flood hit their exit.

The mission was considered a mission impossible considering the fact that there were no detailed maps and the cave was under heavy floods. 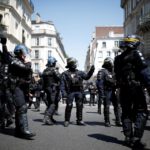