The Land of Smiles is also a land of a thousand misconceptions. Not everyone in Thailand is out to scam you. Nor is everything cheap. Nor is it Disneyland for adults.
Here are seven myths doing the rounds among Thailand’s tourists and what the real deal is:

Not many Thais drink tap water. Nor do they make ice with it, so there’s really no need to spend your holiday drinking warm Coke.
If you’re worried about contamination, the safest thing to do is look for the circular ice cubes with a hole through the middle. These ones are made in a factory with filtered water and are perfectly safe for consumption.
Most wait staff are so accustomed to tourists not wanting ice they automatically leave it out of drinks. On the other hand, many beer-drinking Thais like to toss a few cubes into their mugs so if you go to an outdoor bar the waitress will likely pass you a bucket of ice with your bottle of Singha.

Myth No. 2: All solo male travelers are sex tourists

If you’re male and traveling alone, don’t be surprised if people assume you’re in Thailand for sex. Even if you stay out of the red light zones, you may find yourself getting propositioned by prostitutes. Or just on the receiving end of looks and winks from fellow travelers.

Myth No. 3: Everyone is out to scam you

Sure, Thailand has its scam artists. And when the 99th Bangkok tuk-tuk driver has tried to get you into a suit shop or tells you the Grand Palace is closed, it can certainly feel like you’re in a nation of money-grubbing leeches whose sole purpose in life is to rob you blind.
But if you head out of the major tourist zones and arm yourself with some research on the most popular scams, you’ll find most Thais are an incredibly welcoming bunch, happy to give directions, practice their English or recommend their favorite dish. This is particularly true in less-traveled regions such as Isaan, in Thailand’s northeast.

Myth No. 4: Everything in Thailand is dirt cheap

In the 1990s, you could find decent guestrooms in Bangkok for less than 10 bucks a night. Times have changed. The backpackers might still be there, along with some of Bangkok’s cheapest rooms, but gentrified Khao San Road isn’t the gritty center of bargains it once was.
That said, accommodation prices are still incredibly reasonable. Even the five-star brands cost far less than you’d pay in places such as Tokyo, Hong Kong or Singapore.
The thing to remember is that if you live like a local, you can enjoy Thailand cheaply. That means eating street/shophouse food and not going to high-end nightclubs serving $11 (400 baht) cocktails.
As for shopping, if you want to hunt around for cheap goodies stick to the markets or bargain shopping malls such as MBK and avoid the brand names. You’re not going to find bargains on luxury goods in malls such as Siam Paragon. In fact, you’re probably going to pay more than you would at home because of Thailand’s high import taxes.

Myth No. 5: You can always buy your way out of trouble

It has been said that some Thai police officers will accept a few wads of cash from drivers looking to get out of a traffic violation. Or worse.
But few of the boys in brown will pass up a chance to pounce on a tourist caught buying/smoking/snorting/smuggling drugs, particularly in party havens such as Koh Pha Ngan, where illegal substances are known to be a big part of the full moon party culture.
Most people have seen enough “locked up in Thailand” book covers and documentaries to know that drugs are illegal here, yet some still choose to take the risk and pay dearly.

Myth No. 6: Thailand is a bad place to take kids

Thailand has a reputation for being a haven for sin seekers, but in reality it’s full of fantastic family activities. In fact the locals have a real soft spot for kids, so warn your child he/she may be subjected to plenty of cheek pinching.
Even Pattaya, the worst offender in terms of sleaze, has its fair share of kid-friendly fun such as Go-Karts, water parks and amusement parks.
Most of the major hotels in Thailand are well-equipped for families, offering kids’ clubs and babysitters.
One word of advice though: leave the stroller home if possible. Some of Bangkok’s sidewalks are barely walkable, let alone conducive to evening strolls with the pram.

Myth No. 7: By giving money to street kids, you are helping them

It can be tempting to give money to beggars on the street, especially young kids selling flowers or candy. But don’t do it.
Many are victims of human trafficking gangs that cart people in and out of the city to tug on the heart strings of tourists and locals. The kids don’t see any of that cash. Instead, give money or time to one of the many local organizations trying to help Thailand’s less fortunate. 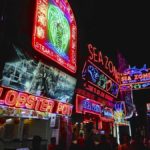 5 things you must know about Pattaya!