Using the heat of the sun to produce electricity sounds like the stuff of science fiction, but in fact, research into solar technology began well over 100 years ago.

But what is relatively new is the idea of floating solar panels on water including lakes, reservoirs and even the sea!

Second, the cooling effect of the water makes floating solar panels up to 16 percent more efficient and longer lasting.

A Memorandum of Understanding has been signed with a private Thai company, SCG Chemicals, to undertake research and development into the idea at its factory at Rayong, 170 kilometers from the capital Bangkok.

“In Thailand, we are blessed with very fertile land for agriculture so for us it doesn’t make sense to use that land for a solar farm – and at the same time by having an agriculture industry we have a lot of water – reservoirs and small ponds – so for those kinds of surface water it would be a benefit to put a floating solar farm on top of it,” said Suracha Udomsak, SCG Chemicals’ Chief Technology Officer for Innovation, Technology and Emerging Business.

“We also have a strong commitment to the CO2 issue and developing more renewable energy is government policy.”

The design team says constructing solar farms at existing hydro schemes will double electricity production from six to 12 hours a day; when conditions limit solar generation, hydropower can take over.

Thailand currently produces around 12 percent of its energy from renewable sources. But it plans to increase that to 37 percent, more than a third of its total capacity, within 20 years with floating solar making a substantial contribution.

Phase one will see Thailand building a 63-million-U.S.-dollar solar farm at the Sirindhorn Dam in the eastern province of Ubon Ratchathani, the full network is scheduled to be constructed over the next two decades.

Eight of the planned solar farms will each be bigger than the world’s current largest, at a collapsed coal mine in China.

Commenting on the scale of the project, Udomsak added: “I think it’s a bold move but it very much makes sense for a country like Thailand to embark on this journey.”

Some have raised concerns that solar panels could block sunlight and affect marine life but those backing the project say the technology is proven and panels cover too small a surface area to create problems.

Meanwhile, the island state of Singapore – where land is extremely limited – is developing a floating solar system in the sea off its coast. 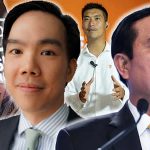