Thailand Justice Minister Somsak Thepsutin plans to share information on suspected sex offenders and psychopaths on arrest warrants, including these groups of convicts to be released from jail.

The minister said on Tuesday that he came up with the plan in the wake of crime by sex offenders and psychopaths.

“An ad-hoc committee will be formed, comprising officials from the Probation Department, the Corrections Department and the Department of Special Investigation to monitor and follow up on these convicts. The Royal Thai Police Office will also be requested to make public at police stations information on those on arrest warants or to be released from jail,” Mr Somsak said.

He assured that the announcements would be made in the near future and a new law would be passed later to make the practice permanent.

Regarding overcrowded prisons, the justice minister said that he would allocate 200 million baht for inmates to make bunk beds for themselves at all 134 prisons nationwide.

“It is unnecessary to build new and costly prisons. There are 134 prisons in the country and they are enough. Bunkbeds will add sleeping space for nearly 100,000 people and it will cost only 200 million baht” Mr Somsak said 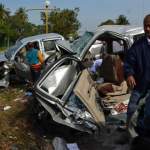