The 12 Thai footballers who have been found alive deep in a cave may have ventured in as part of an initiation, one of the divers who helped locate them has said.

The boys, aged 11 – 16, reportedly went into the Luang Nang Non Cave with their 25-year-old coach in an effort to write their names on the walls.

They were “wading in and trying to go to the end of the tunnel, sort of like an initiation for local young boys to… write your name on the wall and make it back,” Ben Reymenants told Sky News.

But after a flash flood caused by heavy rain they were locked into the cave system.

Mr Rymenants added that the boys appeared mentally fit and were in a stable condition, but had become weak after 10 days without food.

They survived by drinking water from the walls of the cave and had eaten nothing until rescuers reached them. They had only one torch between them, but the battery had run flat.

The leading means of bringing the trapped boys out of the cave is by teaching them to scuba dive. This could take a considerable length of time, as none of them are able to swim.

In addition, some areas of the flooded caves are only wide enough to allow one diver to pass through them at a time.

The Thai authorities have appealed for donations for full-face scuba diving masks which are easier for beginners to use than normal air regulators which fit into the mouth. 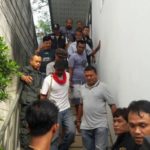 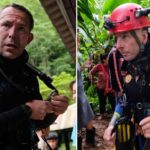