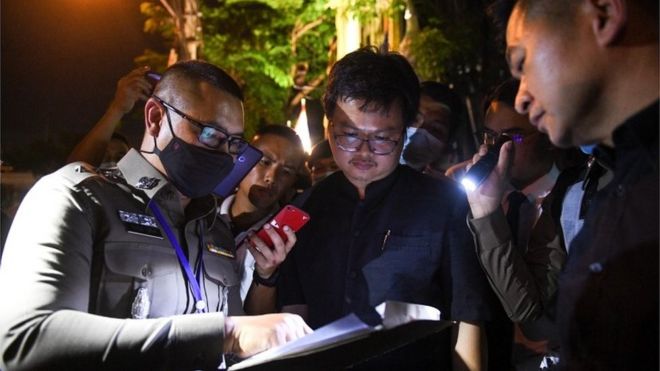 Thai lawyer and activist Anon Nampa has been arrested over a protest where he called for reform of the powerful monarchy.

Arrest warrants have been issued for five other activists.

Thailand’s monarchy has long been shielded from criticism under strict lese-majeste and other laws.

But in recent weeks anti-government rallies have started calling for change to an institution Thais are taught to revere from a young age.

Anon, 36, was the first to openly break the taboo, earlier this month.

Insulting the monarchy in Thailand can lead to up to 15 years in jail under the kingdom’s lese-majeste law.

The use of this legislation has slowed in recent years as Thai King Vajiralongkorn has let it be known he no longer wants it so widely used.

But observers say the government has used other legal routes to target dissent, including the sedition law, which carries a term of up to seven years.

Anon has been charged with sedition, according to Reuters, in his second arrest this month.

Earlier in August he and another activist, Panupong Jaadnok, were also arrested on sedition charges.

At a protest earlier this month Anon stressed that he wanted to reform, not overthrow, the constitutional monarchy.

He focused in particular on the huge assets of the Crown Property Bureau, which, under the late King Bhumibol, had been notionally held in trust for the benefit of the Thai people, but have now been declared the personal property of the king, making him by far the wealthiest person in Thailand.

Anon also questioned King Vajiralongkorn’s decision to take personal command of all military units based in Bangkok, something he believes cannot be compatible with a democratic, constitutional monarchy.

“It had to be done,” he said of his call for accountability.

“That’s why I chose to speak candidly, to honour my own integrity, the integrity of the audience, and out of respect for the monarchy. Because if we don’t speak frankly about it, then we will never understand it.”

Thai police earlier said they had warrants for five other activists who were at an event calling for reform to the monarchy, reported Reuters.

In recent years critics of Thailand’s monarchy who have fled to neighbouring countries have been abducted and murdered. 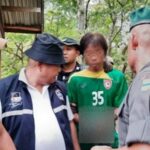 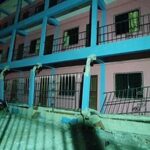