Home » Risky selfie gets kids into trouble with police

Risky selfie gets kids into trouble with police

Some teenagers from Hong Kong have landed themselves in hot water after risking there lives, all for the perfect selfie.

After posting the photo, taken from the top of the Baiyoke Towwer II in Bangkok, on Instagram, word started to spread across Thai social media.

In a report from Stickboy Bangkok on Friday, the management of Baiyoke Tower II in Bangkok are looking into the possibility of filing charges against three teenagers from Hong Kong after a death-defying stunt — for a selfie.

The teenagers, including one named Samuel Chan, climbed to the antenna of the highest point in Bangkok on Sunday, August 26, and took a selfie. Chan then posted it to his instagram account where the people from Baiyoke Tower II found out about it.

According to StickyBoy Bangkok’s report, the hotel staff believes the teens climbed on top of the 88-storey hotel and made their way to the antenna through the fire escape, which by law cannot be locked.

The hotel is currently doing investigations to identify the rest of the teenagers with Chan in the photo and will file a police complaint once they have been properly identified.

As if one high rise isn’t enough, the trio also did the same stunt at the Terminal 21 Shopping Mall on Sukhumvit Road.

As of Saturday evening, both photos have earned almost 6,000 likes on Instagram, but we are yet to find out if these likes are worth the threat of jail time. 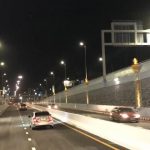