The government’s push to roll out a law to transfer the controversial Pathum Thani monastic land, now the site of the Alpine golf course, to a foundation, is not aimed at favouring the Pheu Thai Party, officials say.

The move is not intended to whitewash former Pheu Thai Party leader Yongyuth Wichaidit, earlier found guilty by the court for his role in enabling the land to transfer to private ownership, according to the Department of Lands (DoL). The bill, which the department is preparing, is aimed at transferring two parcels of land, one covering 194 rai and the other 730 rai, in Klong Luang district from Wat Dhammamikaramvoraviharn in Prachuap Khiri Khan to the Maha­mongkut Ratchawittayalai Foundation.

The land was earlier donated by the late Noem Chamnanchartsakda to Wat Dhammamikaramvoraviharn in 1971. In her will she appointed the Maha­mongkut Ratchawittayalai Foundation as executor of the prime real estate. The foundation later sold the land to Alpine Real Estate and Alpine Golf and Sports Club. The Council of State, the government’s legal advisory body, had found the sale was illegal as the land was a monastic land, and the DoL cancelled the sale. However, Mr Yongyuth, who was then deputy permanent secretary for interior, serving as acting permanent secretary, overruled the order.

The Central Criminal Court for Corruption and Misconduct Cases last week sentenced Yongyuth to two years in prison for abuse of authority as he interpreted the law falsely in overruling the order. Doubts have been raised about the ownership of the land, which has now been turned into a golf course as well as housing estates. Both parcels of the land were alleged to have been transferred illegitimately and subsequently developed into the golf course and the housing estate. Asia Nation

Risky selfie gets kids into trouble with police 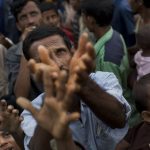