Residents begin boarding up homes, building flood defences and stocking up on essential supplies as cost of everyday items soars ahead of weekend

Hongkongers began preparing for the worst on Thursday, boarding up windows, building flood defences, and stocking up on essential items as Super Typhoon Mangkhut edged ever closer to the city.

Predicted to be the most powerful storm since records began, with maximum sustained winds of up to 240km/h (149mph), the tropical cyclone is forecast to pass within 100km of the city on Sunday morning.

The Hong Kong Observatory warned that conditions were expected to deteriorate significantly later in the week, with very hot weather forecast for Friday and Saturday, followed by frequent heavy rain, squalls, and rough seas predicted for later this

As of Thursday morning, the storm was located 800km from the Philippines with winds gusting up to 325km/h and containing a massive rainband some 900km (560 miles) wide.

At the Pei Ho Street Market in Sham Shui Po, where prices had gone up by as much as three times, shoppers were already stocking up on fruit and vegetables.

A vegetable seller, surnamed Wong, said suppliers had raised prices ahead of the expected storm.

But, a shopper surnamed Sui said she would wait before completely stocking up

Another store holder, called Chung, said egg sales had gone up between 10 and 20 per cent on Thursday morning, but he had not raised prices.

“More people came to buy eggs,” said Cat, one of the women working at the stall. “The sales have gone up by a bit, people don’t want to go out to buy food during a typhoon.”

An elderly woman called Leung, who visits the wet market twice a week, said the cost of fish had also gone up.

Ng, a vegetable store owner at the market, said the typhoon, and the rainy season on mainland China, “where the vegetable farms are”, had forced prices up by 10 per cent.

“Not many customers are buying vegetables as the price is too high,” she said.

At a ParknShop nearby, a woman surnamed Lai, said she was stocking up on other items so she didn’t have to go anywhere if the storm hit.

“I’m buying some melon, chicken wings, and biscuits,” she said. “The prices in supermarkets are pretty much the same, but prices in the wet market have gone up a lot.”

The store’s manager, meanwhile, said they had already sold out of meat, which was much earlier than usual.

On Wednesday, the city’s government convened an interdepartmental meeting, chaired by the security minister to discuss contingency measures and ensure preparedness.

“Representatives from relevant bureaus and departments also reported their preparatory work and contingency plans, particularly on measures in the prevention and handling of flooding, backflow of seawater and emergency plans for high-risk locations,” a government statement read.

“It could be very close to Hong Kong,” said Queenie Lam Ching-chi, senior scientific officer at the Observatory. “It has a large circulation with intense winds, so even if it is not a direct hit … it can constitute a great danger to Hong Kong.”

Sam Wong, who operates a restaurant on the Lei Yue Mun waterfront, said he would begin preparing for the potential affect of the storm on Thursday evening.

“We will move outdoor items [back into the store] to prevent them hitting our full-height glass windows,” Wong said.

He said they would also place sandbags and boards in front of the store to prevent water coming in, and expected that his restaurant will be closed for business starting from Saturday.

Kate Lee, the owner of a cafe which has been in Lei Yue Mun for about 50 years, said the business would close on Thursday afternoon, when she would begin preparing for the super typhoon.

Lee said she would need to bring goods that were stored at the back of her cafe, where part of the structure is above the sea, back to the indoor area.

She also planned to place the five refrigerators in her cafe at a higher level to prevent them being damaged by any flooding.

But Li Kwok-ping, who lives in Ma Wan Tsuen on the Lei Yue Mun waterfront with his family, said he was not worried about the approaching storm.

“I have built a brick wall to prevent water coming in,” said Li, adding the wall is around 1.2 metres high.

He said the wall was built last year, after Typhoon Hato brought extensive damage to various parts of the city, including Lei Yue Mun.

“There should not be any problems this time,” he said, adding that the government had strengthened the breakwater at the area after Hato.

The super typhoon has already wreaked havoc on the Pacific island of Guam, where the governor of the US territory has called on President Donald Trump to declare a state of emergency.

Mangkhut, which was the equivalent of a category 2 Atlantic hurricane when it hit, reportedly dumped up to 15 inches (30cm) of rain on the island, as it damaged homes, tore down trees and power lines, caused widespread blackouts, and brought severe flooding to the island.

Predicted to be the equivalent of a category 5 hurricane when it hits Hong Kong, the storm’s next target is the northern Philippines, where officials have ordered precautionary evacuations and closures of schools and offices, and urged farmers to quickly harvest their crops to reduce damage.

“I’m stressing that this one is very different. This is more complicated because of possible storm surges,” Cagayan governor Manuel Mamba said, as nervous residents recalled another super typhoon in 2016 that caused massive destruction. 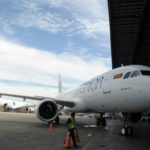