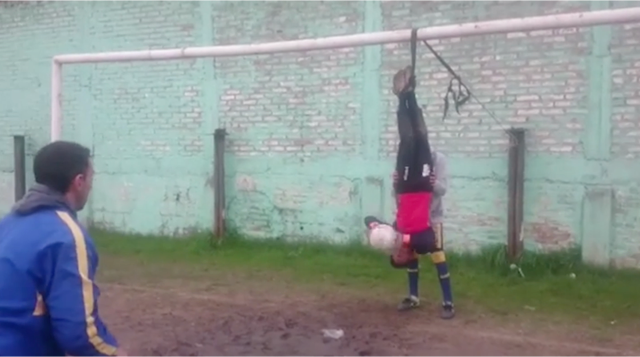 A super-strict football coach dreamed up these extreme training exercises – firing balls over burning fences and hanging a goalkeeper upside down.

Aspiring manager Diego Svery wanted to be a star goalkeeper but had to become a taxi driver after an ankle injury cut short his career in Buenos Aires, Argentina.

They include firing balls over a burning fence which the keeper then has to save. Or hanging the keeper upside down from a crossbar or using a spit-hood to cover the goalie’s face for him to practice catching the ball blind-folded.

Other strange techniques include the goalkeeper leaping from a train carriage, catching plates, balancing on a plastic barrel and leaping into puddled of mud and rolling car tryes at the player.

Diego said that results had improved after his tactics were rolled out. But he apologised for the unorthodox methods after they sparked criticism in local media in the country.

He said: ‘’The club did not give me permission to carry out these exercises and they were entirely my responsibility.

”I apologize to the commission From Club Sportivo Dock Sud, to coordinators and partners if they cause any harm. I never meant to hurt anyone, much less the boys.

”I admit that I am passionate about soccer and I take examples of practices from abroad and I regret it again if I hurt anyone, since it was never my intention. I hope people can understand me.’’ 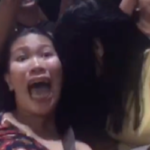 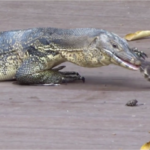 Monitor lizard tucks into a bird in Malaysia