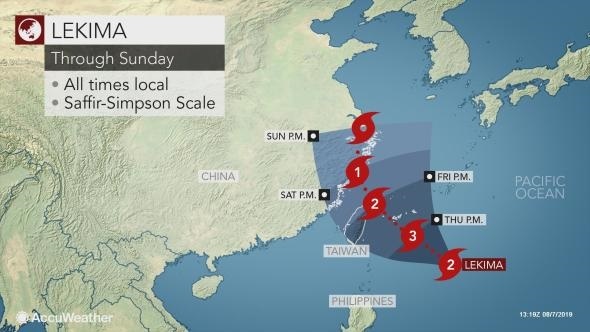 TYPHOON LEKIMA is currently spinning in the Pacific ocean off the coast of Taiwan and is expected to impact the country and China beyond it by this weekend. Is Typhoon Lekima a super typhoon?

Typhoon Lekima is furiously spinning in the Pacific Ocean where it developed last week and is expected to track inland over the coming days.

Since then, the storm has gathered strong winds of 149 mph, with gusts of 161 mph in places.

Favorable conditions out to sea mean the storm is now a category five hurricane on the Saffir-Simpson scale.

Typhoon Lekima’s current strength has led experts to class it as a ‘severe’ or ‘super’ typhoon.

According to the Joint Typhoon Warning Centre (JTWC), a typhoon is a storm with winds stronger than 74mph.

This means Typhoon Lekima, with average wind speeds of 150mph is now a super typhoon – capable of causing catastrophic damage should it make landfall with such wind speeds.

Taiwan’s Central Weather Bureau (CWB) warned the severe typhoon would bring “heavy or extremely heavy” rain to the country by the weekend.

The JTWC said the storm is expected to sustain its current strength over the next two days but could weaken as it heads further inland.

The latest advisory states: “TY 10w (Lekima) will continue on its current northwestward track under the influence of the str (subtropical ridge), moving more northward after tau (hour) 36 as the str reorients in a north-south configuration to the east.

“By tau 48, the system will reach the east coast of China near Taizhou. The favourable conditions will sustain the current sty up to tau 12.”

“Afterwards, increasing vws (vertical wind shear) and land interaction will weaken it to 60 knots by tau 72, shortly after tracking over shanghai.

“Numerical model guidance is in good agreement with a 100nm spread in solutions at tau 72, lending fair confidence in this portion of the JTWC forecast track.

“After tau 72, Lekima will turn more north-northwestward and further inland along the western periphery of the building str.

“Rapid weakening is expected primarily due to land interaction, leading to dissipation by tau 120

“Numerical models significantly diverge in all directions as they lose the weak vortex.” The JTWC said there is low confidence in this portion of the forecast, however.

Lekima is expected to make landfall in Taiwan tomorrow and hit China by Saturday.

The storm will make landfall as a severe typhoon, but by the time it hits Shanghai will downgrade to a tropical storm with winds of 39 to 73mph.