FARMER BRIEFLY REUNITES: After spending two days apart from his beloved buffalo, which authorities seized earlier this week, Surat Phaeoket rushed to the police station and past the media to cuddle the animal.

Surat, a farmer charged with serious fraud offenses for crowdfunding the purchase of his buffalo Tongkum, went Thursday to Khan Na Yao police station after he was summoned to present evidence that he had pure intentions in buying Tongkum. 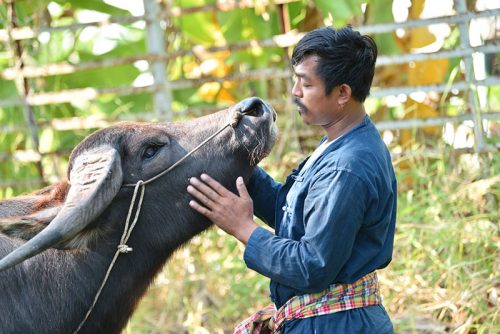 “I never asked for people to send money to save Tongkum’s life. I asked for donations to help me buy him and have him with me forever,” Surat said. “If no one had helped me, I would have nothing left but memories, and my dreams of having a buffalo would be gone. When Tongkum’s not with me, my heart’s not with me.”

“Tongkum! My child! Let’s go home together,” the farmer said while putting his forehead on Tongkum’s snout before leaving to give his testimony to the police.

Surat and Tongkum went viral earlier this month for their smiling online selfies. After the farmer crowdfunded and successfully bought the animal for 100,000 baht, Boonlert Kanpakdee – Tongkum’s former owner and a lesser local official in Chai Nat province – called Surat a beggar Monday for his online appeal. 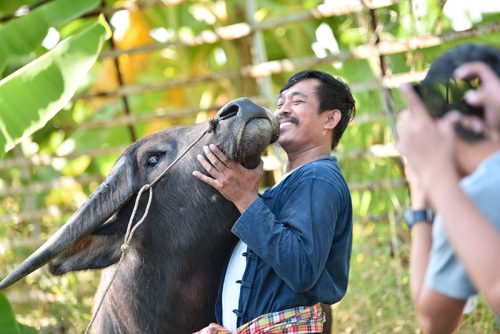 Boonlert, accompanied by a famous ultra-conservative lawyer, handed the 100,000 baht to police. Tongkum was seized Tuesday and Surat was charged.

“I just wanted to create smiles for people and preserve kwai. I want society to know Chai Nat [province] and the farmer life,” Surat said.

Unless Surat can prove his good intentions in soliciting donations, Police Col. Singh Singhdet said the farmer was liable for wrongdoing. Since Thursday, Surat has been charged on four separate counts of fraud, money laundering and spreading false information online, crimes punishable by up to 10 years in prison and a 200,000 baht fine.

Singh said that of Surat’s frozen bank accounts, he received close to 160,000 baht in donations and used 100,000 baht to buy Tongkum.

Of the leftover 60,000 baht, Surat said he hasn’t used “a single baht” and wants donors’ input on what to do with it. Surat also thanked his fans for their continued support, which came in all forms – including a woven loincloth locals gave to him for his Thursday trip to Bangkok.

If Surat did not give a clear account and spoke confusingly, it could jeopardize his case, Singh said.

According to Surat, Boonlert agreed that the farmer should own Tongkum.

Surat asked for the live interview to end because Tongkum started to display signs of agitation from being surrounded by reporters.