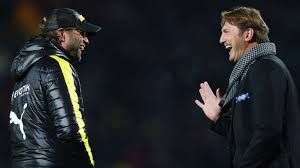 When Liverpool last won the top tier of English football, during the 1989/90 Season, Southampton crushed Liverpool 4-1 at the old Dell. Paul Rideout, Rodney Wallace (2), and Matt Le-Tissier scored for Southampton whilst Peter Beardsley replied for Liverpool with a penalty. Aston Villa came runners up with Tottenham and Arsenal in third and fourth. Manchester United were down in 13th with rivals City in 14th. Sheffield Wednesday, Charlton, and Millwall were relegated. Southampton finished 7th.

Now, nearly 20 years later, Liverpool are fighting tooth and nail for the title with the immaculate Manchester City who are still on target for a quadruple. City, purring and in cruise control, are favourites for the Premier League, Champions League, and FA Cup. Liverpool are more nervy, edgy, and in the case Mo Salah quite erratic.

Names On The Trophy!

City might be favourites for the title but there are clear signs that Liverpool’s name is on the trophy:

Plus of course the ‘Lady of the Pattaya Premier League Crystal Ball’ has spoken! Southampton have bounced back well since their last-minute disaster when Cardiff beat them 2-1 at home. After a few team tweaks, it’s three wins out of four, and they put up a very good performance at Old Trafford and were lucky not to get anything out of that game. For Liverpool Mo Salah is due a goal.

Similarities have been drawn between the two managers but Hasenhuttl has yet to reach the same emotional touchline levels as Klopp! Maybe tonight!

Mo Salah can finally get back on track but somehow, even without Danny Ings, Saints to find a ways to score one goal more.

Heard Of A ‘Sleep Orgasm’?