he second of four siblings who fell of their family’s fourth-floor apartment balcony in Bangkok last month has died.

Seven-year-old Chanida Borel had been in a coma since the May 1 fall in Bang Kapi district and her condition worsened on Monday to the point where her heart stopped beating. Despite doctors’ attempts to save her, she was pronounced dead at 8am on Tuesday at Ram Khamhaeng Hospital.

Chanida’s death followed that of her younger sibling Khanatcha Borell, 5, who succumbed to a head injury on the day of the accident.

The two remaining children have recovered from the incident.

The father of the children, Marcel Borel, a Swiss-national who teaches English, lived separately from his ex-wife and the four children and has reportedly been in a dispute over custody of the children since they separated four years ago. He was visiting Chanida in hospital and reportedly fell to the ground in shock and grief when he was told about her death, a source said.

According to police, the apartment’s balcony had been extended with wooden planks by two feet to store dishes and the fastenings had come loose.

The four children lived with their grandparents and Thai mother, Rattikarn Prakaikaew, in the apartment.

Police suspect the children were sitting or standing on the extension when it gave way.

The incident occurred when the grandparents were sleeping and Rattikarn was working the night shift at a hotel job. 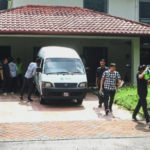