Russian’s attempt to alter VISA STAMP fails at the border

A Russian man who was caught on overstay at the Klong Leuk border checkpoint to Cambodia told immigration he changed a stamp with his own pen.

Dmitril Ignatov, 32, had been in Thailand visiting his girlfriend and was trying to get back to Cambodia.

When his passport was checked in the system he was found to be on three days overstay.

A stamp on page 15 of his passport had been altered in pen.

He said he lost track of the time while with his girlfriend.

The latest in pest control: If you can’t beat them, eat them! 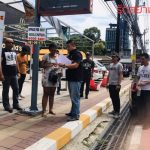