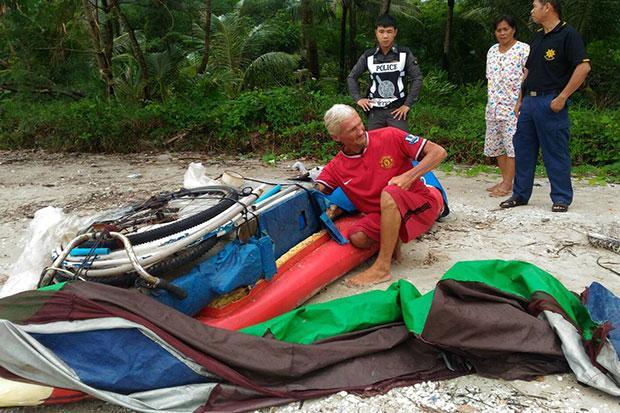 Sao Promrod, the chief of Jek Luck village in Khlong Yai district, alerted police after villagers reported seeing a foreigner in a rubber boat on the beach.

Komkrit Hongthong, an officer on duty at Khlong Yai police station, and rescue workers went to the beach — where they found a man with a rubber boat loaded with a bicycle, clothing, an axe, a cooker and other small items.

Pol Lt Komkrit asked for help from Hassadporn Silachai, an interpreter, to communicate with the man.

It emerged that the man was a Russian tourist who came to Trat from Pattaya accompanied by three friends. After his friends left, the man decided to make the return journey to the resort city via a solo sea voyage in a rubber boat, Pol Lt Komkrit explained.

The Russian stayed afloat for a total of four days without actually managing to leave Trat waters.

The mysterious adventurer was taken to the police station to recover from his exertions on Sunday while police sought assistance from other agencies to determine his identity. He told authorities that he had lost his passport.

Pol Lt Komkrit said the tourist had in fact been found asleep in the boat at Sapchalothorn pier on Saturday, the day before.

When Khlong Yai police woke him up, the intrepid voyager repudiated their offers of assistance and rowed back out to sea.

Alas, this latest attempt to return to the promised land was no more successful, as he washed ashore on Sunday at a village not far from the pier.