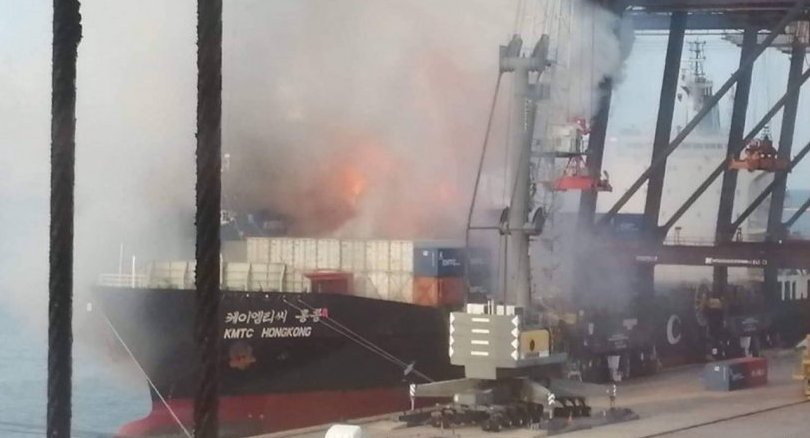 People living near the site of an explosion and fire on a ship at the Laem Chabang Port in Sri Racha district of Chon Buri on Saturday have been advised to stay indoors after the blast sent a cloud of unidentified white powder over the area.

The director of Thailand Port Authority, Kamolsak Phromprayoon, later said that the incident was under control but advised anyone who lived downwind of the port who had inhaled smoke and felt ill to go to hospital.

Earlier, shortly after the 8 am blast, local people near the area were evacuated out of fear that the container where the fire started, on board a Hong Kong vessel, may contain dangerous chemicals.

A source said that an inspection of the container showed there were no dangerous chemicals inside. Containers carrying toxic chemicals are required to identify any dangerous cargo under Port Authority of Thailand regulations.

At the time of explosion scores of port employees were working in the area.

The explosion sent clouds of white power into the air as well as black smoke from the fire.

It was reported that at least 25 of the workers were sent to a nearby hospital after being exposed to the white powder.

Workers remaining at the scene were seen dousing their faces with water to wipe off the powder.