‘Predator’: “The Predator” — the latest installment in the long-running sci-fi action series — chewed up its rivals to debut atop the North American box office this weekend, industry data showed Sunday.

But the Fox reboot, which cost $88 million to make, will look to earn back some money in international markets, as its estimated $24 million haul did not meet expectations.

The movie, which comes more than 30 years after the franchise’s original film starring Arnold Schwarzenegger, courted controversy before its release when the studio cut a scene featuring an actor who was a registered sex offender.

Star Olivia Munn had requested the change, saying she was unaware of the actor’s past when the scene was filmed. Director Shane Black initially said he hired the actor because he was a friend, but later issued a strong apology.

“Nun” stars Taissa Farmiga — whose sister Vera headlined two “Conjuring” films — in a story about a young nun, an exorcist and a guide stumbling onto a dark secret deep in Dracula country: the Romania of 1952 — Transylvania, no less.

Opening in the third spot was “A Simple Favor,” a tale about a mommy blogger (Anna Kendrick) investigating the disappearance of her friend (Blake Lively). The Lionsgate film raked in $16.1 million on the back of positive reviews.

Matthew McConaughey’s new film “White Boy Rick” opened in fourth place with $8.8 million. The movie, based on a true story, stars the Oscar winner as the father of a teenage boy who became an informant for the FBI in the 1980s.

Glitzy rom-com “Crazy Rich Asians,” another Warner Bros product along with “The Nun,” fell to fifth place. The film, with a nearly all-Asian cast led by Henry Golding and Constance Wu, took in $8.7 million, building on a crazy-good run.

Its North American take stands at nearly $150 million, with another $28 million earned overseas.

Rounding out this weekend’s top 10 were: 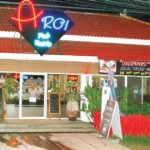