Popular Anti-Dictatorship Rap Song: Deputy national police chief Srivara Ransibrahmanakul on Friday said that there was a 50 per cent chance that the Rap Against Dictatorship’s single “Prathet Ku Mee” (My Country’s Got), released on YouTube this week, is breaking the law.

He said officers from the Technology Crime Suppression Division of the Royal Thai Police will check out the lyrics to see if they violate any junta orders.

The song’s rappers would also be summoned to testify whether they had intended to cause any chaos or violate any National Council for Peace and Order (NCPO) orders, he added.

“I want to warn musicians not to do anything that risks violating the country’s laws, as it wouldn’t be good for them or their families if the songs were deemed to violate the law,” Srivara said.

The video features 10 artists, four of whom wear masks. The single took form over six months. 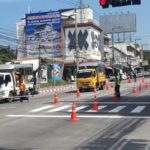 EXCLUSIVE: Hide the rum! Johnny Depp is OUT as Jack Sparrow in Disney’s Pirates of the Caribbean film franchise as actor battles financial issues and personal dramas