Police are currently looking for an unidentified Thai couple that, allegedly, recorded themselves having sex in one of Bangkok’s public taxis and shared the video online.

The story came to the public’s attention yesterday when social media news publisher “Taxi Report TH” shared screenshots of the video on their Facebook page.

The six attached screenshots show a woman in a university student uniform exposing her breasts and a black corset she has on under her unbuttoned shirt.

“Has Thai society stooped so low?” asked the Facebook page. (Editor’s Note: We tried but Coconuts Bangkok was unable to find the original video that the screenshots came from.)

Khaosod reported that, during their search for the perpetrators, the Department of Land Transport (DLT) had already interrogated the cab driver, identified by local media only as Pradit.

Though only one individual was pictured in the Facebook post, according to the cabbie, a man also got in his cab with the woman in the pictures yesterday around 10am and the two got into his vehicle at the Bangkok Metropolitan Administration General Hospital.

He claimed that the passengers remained quiet for the whole ride until they were dropped at Khlong Toei MRT station — so he didn’t suspect anything unusual going on behind his seat.

The DLT has since issued a warning to all public cab drivers, instructing them to report inappropriate activities to authorities and warn passengers if any suspicious events arise. 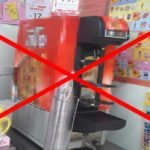 Cambodian kids playing bowls with their flip-flops for money