Police in Songkhla plan to seen an arrest warrant for a suspected insurgency sympathiser captured by a CCTV camera amid the coordinated sabotage attacks that rocked four southern border provinces on Sunday night, a source at Saba Yoi Police Station said on Tuesday.

Investigators identified the man caught on camera at an ATM booth just before one of two bombs went off in Songkhla as Waekoyee Taleh, a suspected sympathiser of the Runda Kumpulan Kecil (RKK) militant Islamic insurgent group.

He said more information was being collected with an eye to seeking warrants, but he did not elaborate further.

And in Pattani, Fourth Army commander Lt Gen Piyawat Nakwanich visited Sompit Sakolwichit, a civilian injured in a blast there on Sunday. He told her the culprits would be arrested soon.

Security measures have been ramped up in business hubs, densely populated areas and state offices following the 20 sabotage attacks in Yala, Pattani, Narathiwat and Songkhla.

Security tight at Government House, though Prayut has his fans 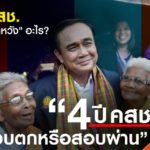