Man Gets Shot After Charging At Cop…

‘Sick’ policeman jumps to his death from…

Home » PM announces 10pm to 4am nationwide curfew – (Yes this does include Pattaya).

PM announces 10pm to 4am nationwide curfew – (Yes this does include Pattaya).

The premier announced the curfew during a meeting with the Covid-19 Situation Administration Centre today (April 2). However, he said, the curfew will not apply to medical workers or patients.

As of Friday (April 3), people will be barred from going outside from 10 pm to 4 am nationwide, with the exception of medical workers, those transporting goods, farm produce, medical supplies, fuel, parcels, goods for export or import, transporting people to quarantine sites, those working on the night shift, and those coming from or going to airports.

Violators of the curfew stipulations will be subjected to two years in jail and/or a fine not exceeding Bt40,000 as per Article 18 of the Emergency Decree.

Provincial authorities have been given the jurisdiction to continue enforcing their existing measures, which are similar, or make them more stringent in line with the curfew announcement.

PM urges people, not to panic and hoard supplies

During his declaration of the curfew on national television on Thursday evening, the prime minister called on people not to panic or start hoarding consumer goods and food as they can still shop for goods during the day.

He assured the public that Thailand has sufficient medical supplies to deal with Covid-19 and plans to procure additional supplies from overseas. He also urged Thais to strictly practice social distancing.

The prime minister said Thailand is ready to ramp up the capacity of all hospitals, dormitories and hotels nationwide to serve Covid-19 patients, whose medical costs will be covered by related state health and medical funds.

Prayut has also ordered the establishment of a centre to oversee the distribution of masks and medical supplies.

He reiterated that Thailand banned the entry of foreigners, except diplomats and work-permit holders, since the state of emergency was imposed.

The authorities reported 104 new Covid-19 infections and three more deaths today, bringing the nationwide toll to 15 and total number of cases to 1,875. 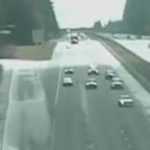 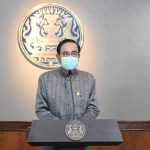 ‘Sick’ policeman jumps to his death from hospital