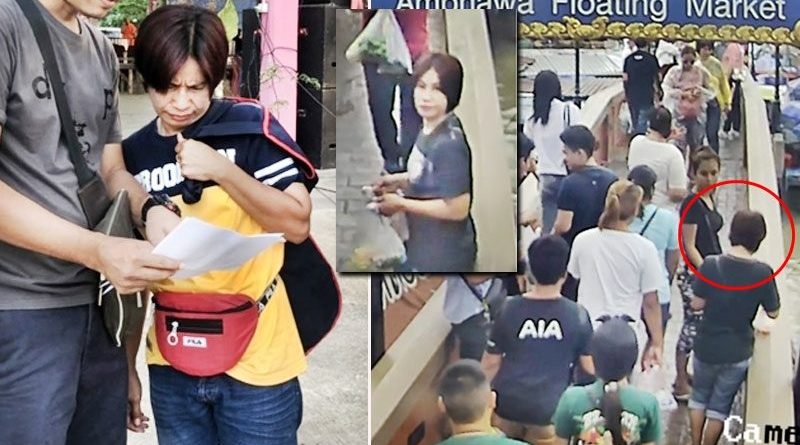 A pickpocket gang was successfully captured on the 19th of this month. The leader of the gang revealed that she normally rents a van for the day’s that her gang decides to go pickpocketing, their locations of choice are usually water markets and temple fairs.

The Crime Suppression Division Police arrested Patchara Banjongchob 46 years old from Khlong Toei district in Bangkok on the 19th of this month under an arrest warrant issued by the Ratburi Provincial Court on the 29th of June 2019. Patchara was arrested at the Wat Charoen Tham Temple Fair in Saraburi Province.

The police revealed that Patchara and her gang of 11 other members often went to the Amphawa Floating Market and the Damnoen Saduak Floating Market and targeted tourists who were visiting the famous Thai floating markets. One day in May 2018, Patchara and her gang managed to pickpocket over 100,000 THB. The Police were able to capture 4 suspects, but the other 8 managed to get away.

The investigation police discovered that Patchara was now selling at different temple fairs. When they received confirmation that Patchara was currently at the Wat Charoen Tham Temple Fair as a market seller the police successfully arrested her on the spot.

Patchara stated that each member had a different task that they were responsible for when pickpocketing. One of them would walk in front of the target, one will walk behind them so there will be no witnesses, and one will quickly pickpocket the target. She admits that they went gang pickpocketing at least 20 times.

Locations that the gang has been to include, Amphawa Floating Market, Damnoen Saduak Floating Market, Rangsit Market, China Town, Platinum Mall, and more. Patchara has been arrested 3 times on charges of theft and has just left prison on 10th of March 2018.