Top leaders and members of Pheu Thai Party converged on their headquarters in Bangkok today to reaffirm their membership as required by a new election law.

After paying his “lifetime membership” fee of 2,000 baht, Phumtham reiterated his call for the junta to lift all restrictions on political activity and stage an election without delay.

Asked about Pheu Thai’s plan to compete with a new party being formed as an alternative for progressive voters, Phumtham said it’s time for all parties improve themselves to compete in the field with new rivals.

“Today, every party must compete with itself. The upcoming election is a stage for talented people to show their ability,” the sec gen said.

The junta has mandated that all members of existing parties, including the two major parties of Pheu Thai and Democrat, must actively re-affirm their loyalty by April 30 or be automatically flushed from the rosters.

Like its Democrat Party rivals, Pheu Thai opened registration on Sunday, but billed today as the largest gathering, because party execs and key regional figures were told to come to the main office on Phetchaburi Road in the capital’s Huai Khwang district to offer Songkran greetings to party elders – a show of fealty amid news of possible splintering in its regional power bases.

For southerner Adul A-Lee, however, his loyalty is firmly with the party aligned with former fugitive leaders Thaksin Shinawatra and Yingluck Shinawatra that has been undefeatable at the ballot box.

“I have been a member for nearly a decade now. I have faith in Pheu Thai Party,” Adul, who hails from Nakhon Si Thammarat, said.

His friend from Trang province, Samran Lipapun, said it’s wrong to assume southerners support the Democrat Party, whose strongholds are mostly in that region.

“It’s an illusion,” Samran said, adding that he was a member since days of Pheu Thai precursor party Thai Rak Thai. “In reality, many people don’t support Democrats.” 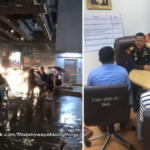