There’s nothing quite like a massage for curing bad backs and aches.

But this pensioner claims she’s unlocked the secret to ‘fixing’ customers – using a ‘magic massage chair’.

Apha Preechankul, 69, injured her spine while gardening when a cobra leapt out and she fell down in fright.

The grandmother-of-five spent months recuperating at home before treating herself with a kitchen rolling pin – then attending classes to learn Chinese and Thai massage.

Apha eventually dreamed up an extra-wide zimmer frame that she uses to walk over over people while they are sprawled out on a wooden bed.

They then sit on her a unique wooden stall which she made herself. She says it’s a ”magic chair” that cured her own bad back and has been fixing her customers, too.

The talented pensioner claims she now has dozens of people flocking to her every week to cure their aches and pains at her home in Angthong.

But anyone wanted a massage from Apha will have to book well in advance – she’s busy and has a waiting list as long as her arm.

She said: ”Everyone that came here said they’re fixed. I’ve been getting more popular and more and more people are coming here for help.’’

Apha charges 250baht for an hour of being walked on and whacked with a rubber mallet, which she says relieves tension in the back.

She added: ‘’I first had problems when I was gardening and saw cobra and ran away and fell down. I had surgery but at home had back ache.

‘’I treated myself with the the wooden rolling pin for bakery. I took lessons and became an expert and invented the magic chair.

”Everybody who has been for a massage with me says it’s a miracle cure. They never have any complaints after.” 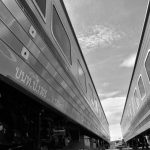