Pattaya residents decided to shame local road crews in the most Thai way ever — instead of filing a complaint, they simply planted banana trees in the mud where a road has been under construction for years with no progress.

The residents got together and planted five banana trees in the muddy bog that used to be Soi Siam Country Club, but has been impassable since local authorities dug it up for renovation three years ago and never came back to repair it.

The road has been under construction for so long that many of the businesses that used to operate there had to close down due to lack of customers since the businesses are too hard to reach.

The residents posted pictures online and sent them to the Thai media, including Sophon Cable, which has been jumping in to point out where Pattaya officials can improve their city lately.

Somchai Wonpakdee, 49, one of the residents who helped plant the banana trees, said that there had been many accidents as locals were forced to travel on the unfinished road, adding that there are no warning signs either.

Sophon Cable reported that the trees were planted to get attention after years of frustrations by locals.

Their actions certainly got a road crew out to Soi Siam Country Club in a hurry. They removed the banana trees but are still not fixing the road.

Fraudsters arrested by police with help from Indians 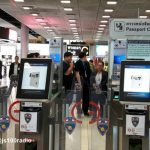 Singaporean Nationals now free to use Auto-Gate at Suvarnabhumi airport