Surachet said each race attracted more than 100 motorcyclists and was also live broadcast via Facebook. The Facebook Live clips were later shared by youngsters. 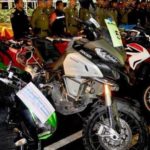 155 motorcyclists in Pathum Thani arrested for modifying bikes for racing

More than 80% of Koreans support idea of ‘dignified death’