Home » One worker killed, two others injured in short circuit

Workers installing a streetlamp pole in Prachin Buri accidentally hit a high-voltage power cable on Wednesday evening, killing one of them and injuring two others.

A witness, Laddawan Sutthirung, 51 said the workers were hired by a motorist to instal a new lamp pole after the motorist hit and damaged it last week.

The workers had used a crane on a six-wheel truck to lift up the lamp pole for the installation but the metal pole accidentally hit a high-voltage cable above, resulting in the short circuit. 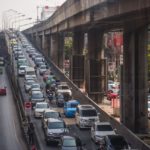 Buses to be reduced on Ramkhamhaeng