Notorious Chiang Mai FLASHER: A Chiang Mai man has been arrested for allegedly exposing himself to foreign women in downtown Chiang Mai in recent days.

Police tracked down and arrested the man after locals, expats and foreign tourists complained of a man showing flashing his penis to foreign women in front of restaurants or in spots with many female foreign tourists.

Police checked footage from security cameras in the area, allegedly identified Anusorn and arrested him while he walked near Wat Phan On in Muang district 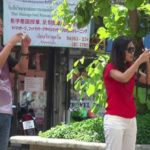 Chinese arrivals down by half in Chiang Mai