Home » Not all Candidates in the Clear 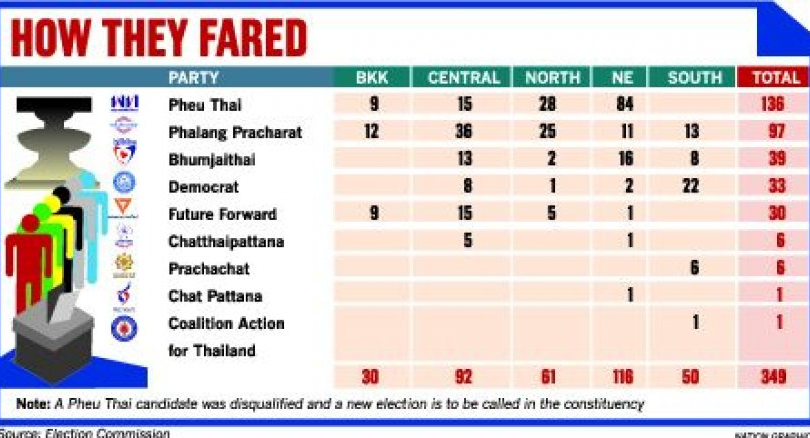 More than five weeks after the country’s first general election in five years, the Election Commission (EC) yesterday endorsed 349 successful constituency candidates for the House of Representatives, of the 350 seats contested.

The vacant spot is for a constituency in Chiang Mai province that will see a rerun of the election later this month after the winning candidate was disqualified, EC deputy secretary-general Sawang Boonmee said.

However, not all of the 349 MP candidates are in the clear yet, Sawang said, adding that disqualification remained a possibility even after they enter Parliament.

Currently, there are some 40 cases being investigated by the EC, involving electoral fraud, which could lead to disqualification.

If found guilty, the endorsed MPs would lose their seats and face punishment, he added.

Tomorrow, the agency will reveal the 150 successful party-list MP candidates who will make up the rest of the 500-member chamber, he said.

However, the dispute over the method the EC will use to calculate party-list seats is still pending a Constitutional Court ruling.

Sawang said the EC has until tomorrow to announce the election results as mandated by the Constitution.

The EC already has chosen the method it will use to calculate the party-list seats once the Constitutional Court issues a ruling, he said, declining to elaborate.

Meanwhile, the anti-junta Pheu Thai Party has demanded that the poll agency opt for a method that does not allot seats to smaller parties.

Pheu Thai spokesperson Laddawan Wongsriwong submitted another letter to the EC yesterday, pleading for it to respect the Constitution and use a calculation method that is constitutional.

The method the EC is considering will allocate seats to as many as 27 parties, while Pheu Thai maintains that only 16 parties are eligible for seats in Parliament.

Future Forward Party secretary-general Piyabutr Saengkanokkul sent the EC a similar message yesterday, insisting that only parties that have won at least 71,000 votes should be eligible for a party-list MP seat.

Piyabutr, a former law professor, said it would be unconstitutional if the EC decides to interpret the law in such a way that seats get allocated to smaller parties who don’t meet the requirement.

The use of this method would come at the expense of Future Forward, which could lose seven seats or some 600,000 votes, he said, adding that his party would sue the EC for negligence of duty if such a situation arises.