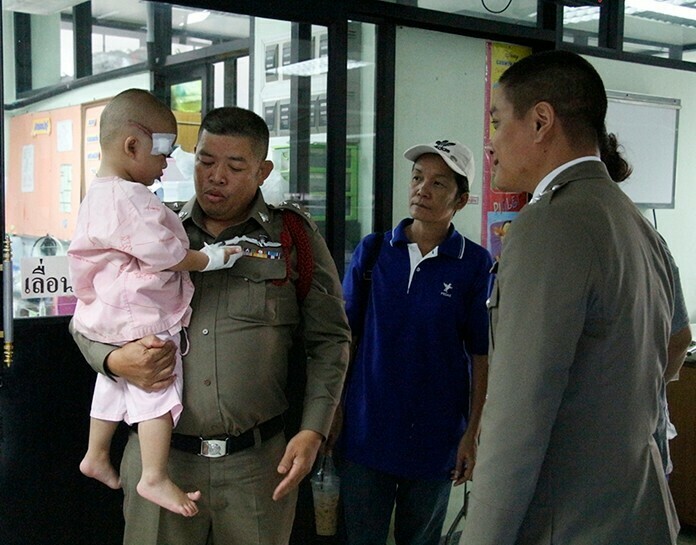 Nongprue officials have suspended all operations by police volunteers after one knocked a two-year-old boy unconscious with a wooden bar.

Ten-year volunteer veteran Jakapob Boonrod failed to appear for police questioning following the incident where he tried to block a motorcycle trying to escape a police checkpoint with the two-meter pole. In doing so, he hit 25-month-old Sila Ninkum in the head.

The child was knocked out and needed three stiches to close a head wound.

The boy’s father, Siwa Ninkum, 28, filed an assault complaint against Jakapob. Nongprue deputy police chief Pol. Col. Krit Masuk said that charge could be upgraded to attempted murder depending on the severity of the child’s injury.

Krit visited “Nong Sam” at the hospital March 27 and reported that the toddler is active and playing, but still sore. Medical scans came back negative for any lasting damage.

While Jakapob did not appear before police, he spoke to the media, saying he hit the boy accidentally.

Siwa said he was driving with his wife and child on a motorbike around 10 p.m. when he spotted the checkpoint. As none of the three people on the bike were wearing helmets, and because Siwa admitted to taking drugs several days earlier, he feared a ticket or arrest and tried to make a U-turn.

Jakapob blocked him, hitting Nong Sam in the head as Siwa swerved the bike.

Krit said the case is on hold until the boy’s mother makes a formal statement to police. After that, Jakapob can be brought in for questioning and exact charges set. Siwa also may face charges of driving without a helmet or using drugs.

Until then, all police volunteers have been suspended until Nongprue police settle the matter and review procedures.

Update: Jakapob Boonrod is out on bail after being charged with assaulting a toddler with a wooden pole while on duty. Jakapob paid a cash bond and was released from custody March 28. Police reiterated charges could be upgraded to attempted murder depending on the final medical report from Banglamung Hospital, where the toddler is being cared for. 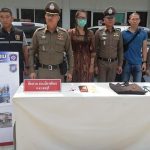