Home » No Police to be found

No police on duty at local station for over 2 hours

At around 12:30 on February 6th, a foreigner entered a local police station in Nong Prue to report a fatality that had occurred. To his amazement, there was not a single policeman or woman in sight.

Instead, he found 2 young workers, approximately ages around 20 years old, 1 male and 1 female. They were sat behind the desk, and had been instructed by their boss to take notes of any incidents reported, for them to be dealt with later.

After questioning the young girl working, she had told locals that her boss, the policeman on duty responsible for noting any incidents that night, had popped out for something to eat.

The foreigner wasn’t the only one waiting either, as by the time the officer on duty returned to his post, there was already a rather large group of people waiting to report incidents and crimes that had taken place.

Some locals told reporters that they had been waiting for over 2 hours. 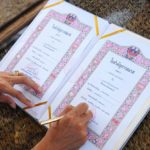 How to Get Married in Thailand Legally