The “queen of rap” will twerk her thinly-covered behind into Bangkok for the first time later this year.

Born Onika Tanya Maraj, 36-year-old Minaj rocketed to fame after she released “Anaconda,” “Super Bass” and “Starships.” The rapper released her fourth album “Queen” in August, which features several artists such as Eminem, Lil Wayne, Ariana Grande and The Weeknd. 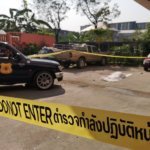