Home » Nearly 2,000 minors split from parents at border in six weeks: US

Nearly 2,000 minors were separated from their parents or adult guardians who illegally crossed into the United States over a recent six-week period, officials said Friday, as debate raged over how to end the deeply controversial practice.

President Donald Trump, facing mounting anger over his administration’s “zero tolerance” border security policy, repeated he is incensed about the family separations but continued to blame opposition Democrats for the crisis, which critics say is one of his own making.

And the president signalled the drama could drag on.

After Trump initially seemed to say he was not keen on a Republican compromise bill that includes a fix to the separation issue as well as DACA protections for young migrants who arrived illegally as children, the White House walked back his remarks.

According to a Department of Homeland Security spokesman, between April 19 and May 31, 1,995 children were separated from 1,940 adults who were being held by US border patrol.

Amid an outcry over the detentions, the DHS official insisted the minors were held in decent conditions.

“We have some of the highest detention standards in the world for children,” he said.

Some 1,500 boys are being held in a former Walmart supermarket in Texas, and the government is erecting tent structures near the border to house the increasing number of migrant children, including unaccompanied minors, in custody.

With the crackdown in full swing, the detained parents are “in jail settings,” the official said, awaiting adjudication and possible prosecution for crossing the border. The process can take several weeks.

“This administration has made it clear that we are not going to ignore the law any longer,” the official said.

The Republican-led House of Representatives may vote next week on two immigration measures — a hard-line bill drafted by House Judiciary chairman Bob Goodlatte, and a compromise measure that limits legal immigration while also ending the family separations.

“I’m looking at both of them,” Trump told Fox News.

Trump’s opposition would deal a body blow to efforts to tamp down the border crisis, which has raised alarm among evangelical leaders who backed Trump’s campaign.

“The administration shows no sign of backing down from its policy of separating children from their parents despite powerful new condemnation from faith leaders,” Tom Jawetz, vice president for immigration policy at progressive group Center for American Progress, told AFP.

Hours after Trump’s comments, the White House issued a statement saying the president had misspoken.

“The president fully supports both the Goodlatte bill and the House leadership bill,” according to White House spokesman Raj Shah.

The compromise House Republican bill reportedly would provide $25 billion for a border wall, and detail a process giving young undocumented immigrants permanent residency and a pathway to citizenship.

On Twitter, Trump addressed what he specifically wants in new legislation including “full funding for the Wall;” an end to a diversity visa lottery and certain categories of family-based migration; and a shift toward “merit based immigration” for skilled workers.

He also accused Democrats of “forcing the breakup of families at the border” because they are pushing their own “cruel” uncompromising legislative agenda.

Family separation “is an immoral, horrific policy,” added Senator Dianne Feinstein, who has introduced legislation to keep immigrant families together.

Trump stressed he opposes the separations.

“I hate the children being taken away,” he said.

But he also repeated the falsehood that Democrats, currently in the minority in Congress, are responsible for a law that mandates family separations.

There is no law that requires parents be separated from their children at the border.

But if parents in the United States are jailed, their children are split from them because the children are not themselves charged with a crime.

The DHS official also rejected as “not true” various reports of wrongdoing, including the turning away of some asylum-seekers.

He also refuted the claim that agents were surreptitiously misleading children and parents in order to separate them, as well as one report which detailed a mother being separated from her child during breastfeeding.

“We do not separate breastfeeding children from their parents,” the DHS official said. “That does not exist, that is not policy.” 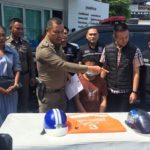