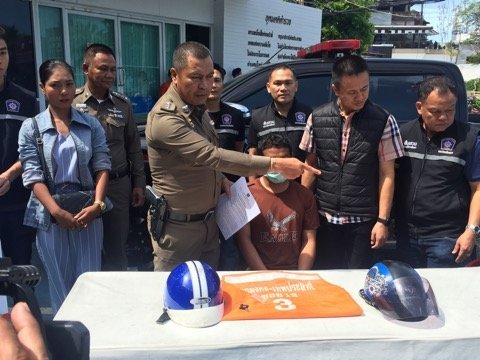 Pattaya Station chief Pol Col Apichai Krobpetch announced the latest arrests of a snatch thief and drug dealers at the resort on Friday.
Pol Col Apichai said there were five men and one woman. They are the people in the motorcycle helmets in our picture.
Star exhibit was 31 year old Hiran “A” Narksomboon a motorcycle taxi rider who swiped a half baht (about 10,000 baht value) gold necklace from the neck of a Thai woman called Wasana Kertnoi who is married to a foreigner. They were riding a bike at the time.
Hiran was found to have previous for drugs and a warrant out for his arrest from the Pattaya court on drugs charges.
The others arrested were all connected with “Ya Narok” said manager in a reference to Ya Ba.
But for a change the Pol Col was not giving out any more details as this might prejudice the investigation. NA – EP

7 ways to reduce plastic usage and make the planet greener

Nearly 2,000 minors split from parents at border in six weeks: US