A Muslim resident of Narathiwat was shot dead in front of his house in Si Sakhon district on Thursday night, police said.

Rosee Pirisee, 42, a gardener, was shot four times with a shotgun at 8.30pm and died where he fell in Moo 7, Tambon Si Sakhon.

The gunman was apparently hiding in foliage 30 metres from the house, he said.

Police believe the murder stemmed from a personal conflict and was unrelated to the Malay Muslim insurgency. 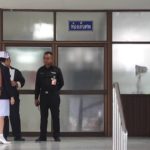