A mum-of-two ended up in hospital after suffering an allergic reaction to fillers that made her lips swell to six times their size.

Lauren Evens was given antihistamines, but her swelling became so severe that she could no longer talk and her airways started to close.

Doctors at Countess of Chester hospital rushed the trainee beauty therapist to the resuscitation unit and injected her with adrenaline to save her.

Lauren, from Chester, Cheshire, had her filler topped up last week and thought everything was fine, but had her terrifying reaction an hour later.

She said: ‘My lips looked like a baboon’s bum. They went around six times bigger than their normal size. It was very painful.’

Lauren couldn’t close her mouth and struggled to talk as she endured a six hour wait at A&E.

‘I fell asleep and they woke me up to give me some more antihistamine and they said that they were getting bigger and bigger. It was scary,’ she added.

Lauren said that she’d have her lip filler refilled around every six months, and topped them up with just under one ml this time around.

Within four hours of having the procedure, her lips had become ‘huge’. She arrived at the hospital at around 10:30pm and didn’t leave until the following afternoon.

She said she was sent home with antihistamnies and that although the swelling took three days to subside, her lips were still painful five days later.

Lauren said: ‘I’ve had a lot of lip filler and treatments before and had it previously around four weeks ago and didn’t have a reaction.

‘It’s unexplained as to why this happened. Apparently at any age and at any point you can develop an allergy to something.

‘I won’t be getting lip filler again anytime soon. I want to have the allergy test to see exactly what I’m allergic to, the thought that it could happen again is very scary.

She added: ‘I get lip fillers for a confidence boost, I wouldn’t tell people not to get them done if they want to get them done but I’d say be careful and it’s more the fact that an allergy can come on at any time.’ 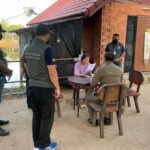