Thailand has extradited a Mozambican fugitive wanted for a string of kidnaps for ransom and murders, police said yesterday, as a crackdown deepens on foreign gangsters using the Kingdom as a bolt-hole.

Momade Assif Abdul Satar entered Thailand three years ago shortly after being freed on parole from a Mozambique jail for the 2000 gangland-style murder of an investigative journalist in the capital Maputo.

Interpol issued a “red notice”, or a non-binding arrest warrant, after allegations Satar continued to run a ransom-kidnap business across Mozambique and South Africa from overseas.

The gang snatched wealthy executives and charged up to $3 million (Bt99 million) for their release.

Media reports in Mozambique and South Africa say a number of those kidnapped were later murdered.

Satar, who was arrested in Bangkok last week, may have entered Thailand on a fake passport and then set up a front company to obtain a visa, said the Deputy Commissioner of Thailand’s tourist police.

“He was extradited at midnight (on Tuesday) on a flight to Kenya,” for onward travel to Mozambique, Police Maj-General Surachate Hakparn said.

“We will not allow foreign criminals to use Thailand as base for their operations,” Surachate added.

Satar is the latest in a mounting tally of foreign criminals found hiding out in Thailand as the country tries to banish its reputation as a bolt-hole for bad guys.

In regular round-ups around 2,000 foreigners have been arrested – including drug dealers and prostitutes as well as visa overstayers in Thailand’s tourist hotspots.

Tourism is a cornerstone of the Thai economy and the Kingdom expects to welcome over 36 million people this year.

But with borders to several neighbouring countries it struggles to keep tabs on the volume of people coming in and out, including people posing as tourists who then overstay.

Police concede there are gaps in the system, exploited by organised crime networks including human traffickers and drug gangs who have long used the country as a base.

But Thai authorities are tightening up border security and plan to introduce new face and iris scanning technology at its borders in the coming months.

“Once we do that, suspects will not come here,” Surachate added. 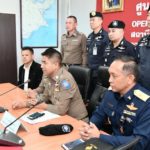 7 arrested with fake goods on Samui