A monk in robes borrowed his mate’s car and took it for a spin on the roads near his Suphanburi temple.

Unfortunately no sooner had he got out of the temple and put the orange motor into top gear, he hit a tree and was trapped inside with another friend.

It all happened yesterday – just one day before Phra Thapanat Chaiyasut, 31, was to leave the monkhood.

Sam Chuk police and medics rushed to the scene of the accident yesterday and founf the monk and Bunrit Pheungcharoen, 19, trapped in the car that was severely damaged.

The monk broke his arm and had a leg injury. His passenger was unconscious and immediately taken to hospital, reported Daily News

Police discovered that Phra Thapanat had been visited by a friend and had asked to borrow his car. He raced out of the temple at high speed and almost immediately lost control crashing into a tree.

It was not reported if there were any amulets in the car. 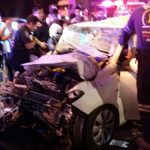