Two month ago Manchester United winning the Champions League would have been unthinkable. So would have United’s chances of making the Premier League top four. Then along came Ole Gunnar Solskjær… United now sit in fourth and are chasing Spurs.

Of the 16 Champions League teams left United are not expected to progress much further. Manchester rivals City are favourites to lift the trophy with PSG down the list in fifth and United are tenth. That’s how the bookies see it.

We’ve known for a few weeks that Neymar would be missing and now he’s been joined by one of his strike partners Edinson Cavani. The Uruguayan Cavani, who will be 32 on Valentines Day, has 21 goals in 25 appearances this season and will be a big miss. Concussion rules out right-back Thomas Meunier whilst midfielder Marco Verratti, returning from injury, might only have 60 minutes in his legs. PSG will be hoping for a special performance from their World Cup Winner Kylian Mbappe. 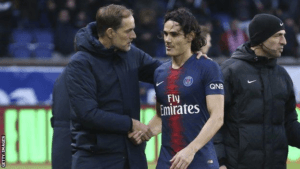 Pattaya One. Edinson Cavani misses out tonight through injury.

Solskjær, who shuffled his pack for the trip to Fulham last Saturday, will be expected to play his strongest side and that means Marcus Rashford leading the front line. He’s been on fire since Solskjær’s arrival and linking well with the also red hot Paul Pogba. Both players could play major roles tonight. Missing for United through injury are Antonio Valencia and Matteo Darmian.

Sooner or later Solskjær has to lose. All managers do. But not tonight! One thing the Solskjær era hasn’t managed is a Premier League clean sheet at Old Trafford. This is despite four our of five shut outs away from home. Tonight could be the night.