A 32-year-old man with a mental disorder was hit and killed by a passenger train in Buri Ram’s Mueang district on Tuesday morning.

Mueang Buri Ram police station was alerted to the fatal accident at 9am.

The victim was identified as Yodrak Paewpolsong, who lived in Moo 15, in Mueang district’s Tambon Chumhed.

The village head of Moo 15 told police that Yodrak had a mental disorder and he liked to wander around, talking to himself. 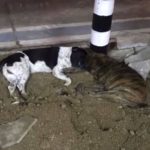