A man, 34, fell to his death from an elevated road above Rama IX Road in Huai Khwang District, Bangkok, shortly after midnight, reportedly after an argument with his girlfriend.

Police at Makkasan station were informed of the incident about 12.40am. The man’s body was found lying on the inbound section of Rama IX Road near Rama IX intersection. He was wearing a black T-shirt and blue shorts.

He was identified as Pudis Latthasaksiri, a native of Suphan Buri province, a salesman for a  telecommunications company.

Nearby, police found a black Mazda 2 car and his crying girlfriend, Praipana Rinprom, 31.

Police said the man had picked Ms. Praipana up from Krungthep Kreetha area and they were heading for his residence on Soi Phra Ram Kao 15.

They had an argument on the way and the man said he wanted to die. They parked the car on the elevated road, Pudis got out and jumped, falling onto Rama IX Road, Praipana told the police. 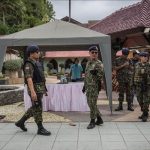 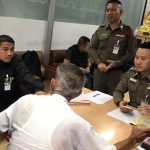 Police Chief cares about EVERY tourist in Thailand