A hill-tribe man was burned to death in a fire that engulfed his bamboo hut in Chiang Rai’s Mueang district late on Thursday night, police said.

The charred body of Aguni Sae-lee, 48, was found in the centre of the house, which was completely burned down. The bamboo walls were reduced to ashes, leaving behind only galvanized iron sheets that once formed the roof. Police said the fire started at 11pm and consumed itself quickly because of strong winds. Neighbours told police that the man might have lit a fire inside the house to keep warm as the temperature was very cold at night. The man might have fallen asleep, neighbours surmised, causing the walls to catch on fire.  Source: Asia Nation

(Most Hill-tribs house have kitchen inside the house) 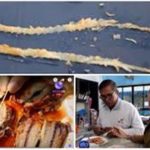