Embezzlement Case: Six civil servants – including three police officers – and one civilian were summoned on Thursday to provide information about their alleged links to the embezzlement suspect and former Loei police chief, Pol Maj-General Suthip Palitkusolthat.

The identity and positions of the seven are being withheld pending the result of the police probe.

Suthip, who had earlier been transferred to the police office in Bangkok, was on August 17 temporarily discharged from the Civil Service after being sued by a Provincial Police Region 4 Office for alleged fraud and the embezzlement of Bt240 million from 192 police officers.

A subsequent probe found grounds for the allegation that he had misappropriated the loan scheme’s money and concluded that the alleged fraud had also caused nearly Bt1 billion in damages to northeastern residents allegedly lured into investing in the scheme. The probe also led police – in coordination with the Anti-Money Laundering Office – to seize assets worth Bt130 million from Suthip and his alleged accomplices.

Rungroj told media that he and senior police had met at the police regional office in Khon Kaen on Thursday to discuss progress in the fraud case, and revealed that the seven suspects had been arrested. Rungroj also said the embattled Suthip had provided useful information to the investigation and co-operated by meeting police for every appointment. 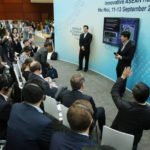