legendary Caravan Band: Mongkol Uthok, a musician in the legendary “songs for life” Caravan band has died at the age of 67, band leader Surachai Chantimatorn has reported.

Surachai posted a message on his Facebook wall that he was in Chumphon when he got the sad news.

Mongkol was one of four band members of the Caravan, which was formed in 1974 following the 1973 student uprising. The band called its songs “Pua Chiwit” (for life) as they mostly touched on social issues and injustice.

Mongkol was born in Phanom Prai district in Roi Et. He was a student activist and formed the Bangladesh Band while studying at Techno Korat, then known as North Eastern Technology College.

He played several musical instruments, including lute and mouth organ.

He participated in the 1970s campaigns against US bases in the Kingdom, and joined communist insurgents after the student movement was crushed in the Thammasat student massacre in 1976.

A bathing rite will be held at 3pm at the Wat Pak Nam Pibul Songkram in Nonthaburi’s Muang district. 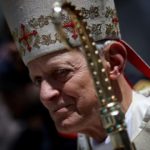 Archbishop of Washington prostrates himself at mass for abuse victims