Dies Beside Motorway: A woman died after she was spotted unconscious in her car on the Chon Buri-bound motorway between Chachoengsao’s Bang Pakong district and Samut Prakan’s Bang Bor district on Friday morning.

Highway police and rescuers from a foundation in Chachoengsao attended after receiving alerts of the unconscious driver.

She was identified as Karnsuchaya Jirathanitsak, 32, from Rayong’s Muang district.

Police said the woman apparently stopped on the roadside before she passed out.

When rescuers arrived she was not breathing and rescuers performed CPR for about 10 minutes but failed to resuscitate her.

The body was sent to Bang Bor Hospital for a post-mortem. 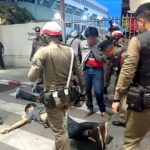